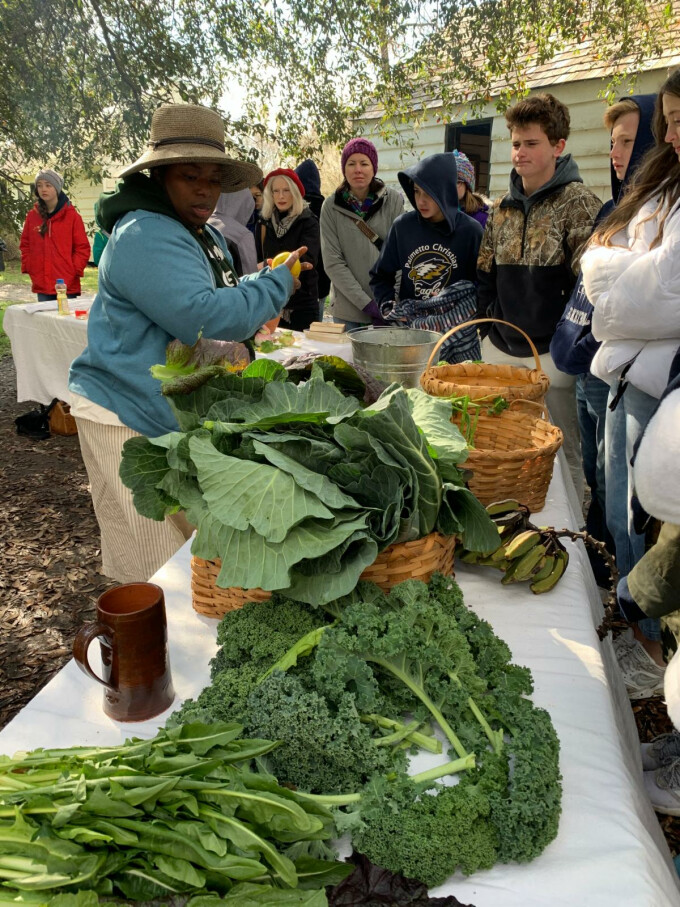 Last Friday, the PCA 7th Grade classes visited Magnolia Plantation. The young students were able to participate in a special presentation by The Slave Dwelling Project. The mission of the Slave Dwelling Project is to raise awareness of American history by addressing the legacy of slavery. The group does so by re-enacting on properties that generally have old slave houses or dwellings. This year's program at Magnolia Plantation was called, "Inalienable Rights: Living History Through the Eyes of the Enslaved".

Students were first greeted by the founder of the Slave Dwelling Project and Civil War re-enactor, Joe McGill. McGill greeted the students in historical clothing and proceeded to tell them how he travels to various properties throughout the U.S. and actually stays the night in their slave dwellings, such as the ones currently on Magnolia Plantation. "Now that I have the attention of the public by sleeping in extant slave dwellings, it is time to wake up and deliver the message that the people who lived in these structures were not a footnote in American History," stated McGill. PCA students were then transported into another time as they walked on the plantation property and experienced re-enactors performing their trades in front of the slave houses. Students were educated on the challenges of cooking for many people, and what crops they grew and meals they prepared. There was also a brickmaker and blacksmith performing their skills on site. Students saw a dramatic performance from a Harriet Tubman re-enactor as well.

Many of the students enjoyed the lectures and learned of the slaves' challenges. 7th grader, Lauren Pabst, states, "I enjoyed the cooking demonstration. They had to cook outdoors and it wasn't electric. So, it was harder and probably took longer." Fellow students Gavin Wease and Daniel Stewart enjoyed watching the blacksmith work with fire and yield the iron. Middle School History teacher, Kara Karnes, knew this field trip would be important. "I just like them to be able to see what life was like, and be able to see history as opposed to just learning it in the classroom. I think it sticks with them better through the demonstrations and having the experience."

Prepare to be transported to a magical world that only dreams can conjure. PCA's Center Stage will soon showcase visions of Indians, fairies and crocodiles swashbuckling on pirate ships while flying back and forth from the home of Big Ben to the Neverland Island of The Lost Boys. Director Jenni Brown, along with nearly 85 members of cast and crew, are currently in rehearsals for the PCA Middle School production of Peter Pan.

With growing numbers of students interested in the PCA Drama Program, comes great excitement for Jenni Brown, but not without its directorial challenges. "There are 27 roles for the main cast in the play, 16 Indian dance girls, 6 pirate chant boys, and 3 commercials with 7 to 8 kids performing in each, plus the stage crew," explains Brown. The commercials are a new segment introduced to the drama this year. "The reason for the commercials is to include as many kids as possible in the production in a creative way. We have always had benefactors, but this was just a cool way to have your business advertised with live Peter Pan characters as related to the storyline of the play."

Another big challenge for the director is keeping up with all the costumes. Brown mentions having to come up with a system to stay organized, and admits she can't do it on her own. "I'll need to recruit parent volunteers to help me with the costumes. Another thing I want to say is, I'm so thankful for all the parent volunteers. Peter Klassen has helped design the pirate ship, David Pabst has made many props with his wood cutting machine and Kevin Andrus is helping with props. This is in addition to many other volunteers helping with snacks, make-up, a cast party and more. I am appreciative of their help."

Once again, Brown will be working alongside the talents of costume designer Pam Hall (PCA Lower School Music Teacher) and set designer Anna Boyer (PCA High School Art Teacher). Brown keeps with her vision for the set and costumes, and leans on the creativity of Hall, Boyer and the Art I students. "I design the set and tell them how many panels to paint for each scene. I let the helpers be creative with it," states Brown.

The student actors rehearse their blocking on a bare stage. However, when the creation of the set and the donning of the costumes are added, it can make all the difference when the actors are trying to channel the personalities of their characters. Henry Goldsmith plays the iconic Peter Pan and he explains. "For sure, I think when I have my costume and I see how realistic the set is, it will make me feel like I'm in it. I am Peter Pan, and not just acting like Peter Pan." Eighth grader, Amadea Friedl, plays Wendy Darling. Friedl also believes there is a magical transformation into character. "When I saw the costume and I see how the set is coming together, I can relate and get into that personality. Some scenes Wendy is bossy. In others, she is motherly and sweet." Friedl acknowledges Wendy's swing in personality can be her greatest challenge when trying to bring her to life on stage. Goldsmith also discloses his greatest challenge when acting. "The hardest thing is trying to act like I'm a little boy and everything I do is so amazing. My character thinks everything revolves around him."

Posted by Cassy Andrus with