While the curtains may have closed on Disney’s Aladdin Jr. it has far from been forgotten. With three performances that sold out within days, more tickets had to be added not once, but twice to accommodate the number of PCA friends and family that wanted to come and support the cast and crew. They were not disappointed. From the voices that sang the characters to life, to the hands that made the magic carpet “fly”, to the commercials and ads that gave thanks to the play's sponsors, it took a village the size of the Sultan’s palace, as well as some impactful lessons, to make this play take flight.

“I learned that commitment is a major part of the student's life,” said eighth grader Grace Parker, who took part in one of the commercials. “Making the right choice both on and off stage can be very Influential in others' lives as well as your own.”

"It was fun,” said Ava Benton (8th grade), who also played in a commercial. “We got ready together and helped each other learn our lines!”

“I learned that whatever happens you have to just keep going!” said Alyssa Carper (8th grade), who played one of Jasmine’s friends/maids. "And it all came together in the end!”

Along the way some students also discovered new talents. Seventh grader George Greene, who played Iago, was asked to design a slide presentation that would play before the performance, showcasing the lead characters as well as the ads of the businesses that helped sponsor the play. He got to work without delay! “I like how I got to do what is fun for me, while helping others and making it easier for Mrs. Brown. I liked how we got to work together and everything went so smoothly!”

The cast and crew of Aladdin Jr. left the play with not only new skills in choreography, vocals, and acting that they learned from the incredible Jenni Brown and Kathy Thames, but they also learned the importance of working together as a whole.

“I learned the lesson of teamwork,” explained seventh grader, Abel Walters who played Aladdin. “To make a play everyone’s value is the same, every dancer and guard came together to make the scenes happen and put in so much work, even though parts like running choreography were hard, everyone came together and played their part well!!”

Bravo to everyone who had a hand in this production, as it truly was an unbelievable sight which left the audience amazed and fully entertained! 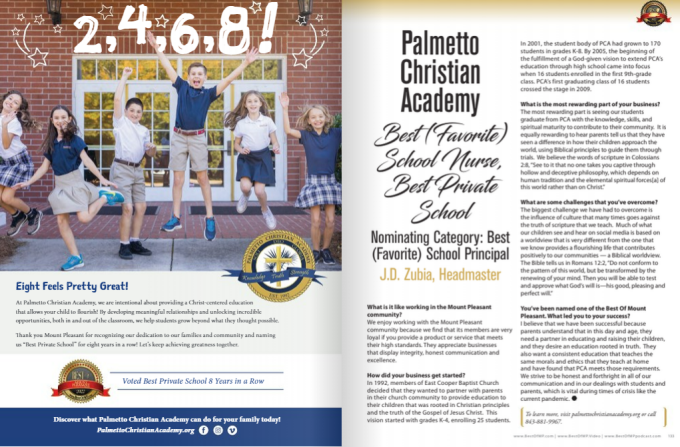 We simply can't thank you enough for your support over the years - our families and friends have voted us "Best Private School" eight years in a row. We are honored and we are grateful for the opportunity to partner with you in providing an exceptional Christian education for your children.

If you haven't had a chance to pick up your copy of Mount Pleasant Magazine, Best of 2022 edition, please take a moment to read the incredible feature article on PCA in the digital version here.