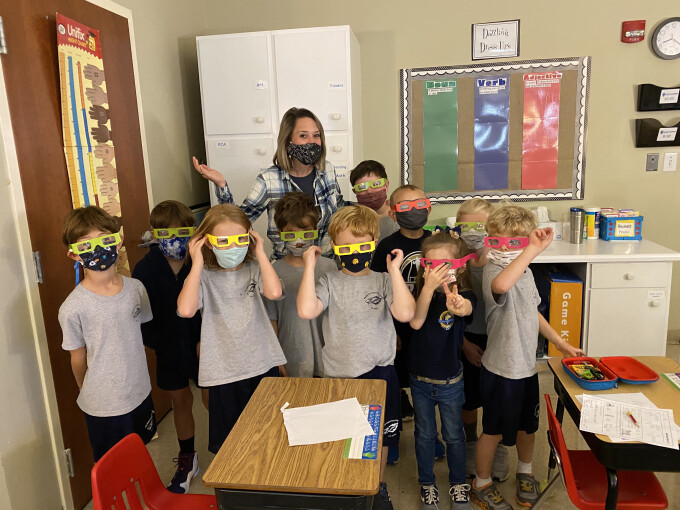 Peter Pan isn't the only one who likes to chase his shadow, our first grade classes have also found out that playing with shadows can be fun and educational.

Last week, each class learned about the properties of light as well as how shadows are formed. Eager to demonstrate their new knowledge, the first graders participated in some hands-on activities, such as tracking their shadows through chalk drawings.

"The shadow activity was an investigation about how shadows change when the position of the light source changes," said first grade teacher Denae Beckett. "They drew their shadow in the morning and then stood on it again in the afternoon to compare and note the movement of their shadow due to the different location of the sun in the sky."

Payton Ralph said, "It was fun to create stuff and I learned that there are little waves that come out of the sky from the sun."

Shadows don't just come out in the sun, though, they can also be used to tell shadow puppet stories.

"This project allowed them to observe what happens when things are closer or farther from the light source," continued Beckett. "We also observed how light behaves when it shines on different materials."

First grader Jacob Cox learned that "when you look at the light it shows how the light is made and it looks like rainbows."  While Kingston Surrat found out that, "shadows can't get smaller than your hand."

"ELA was included in the shadow puppet activity," Beckett explained. "Creating stories that had a beginning, middle, and an end...each team performed their story for the class. The children did a great job introducing their story, telling their story, and then bowing at the end."

With the lesson spanning across the curriculums, the first graders enjoyed a  week filled with shadows, lights, and rainbows.