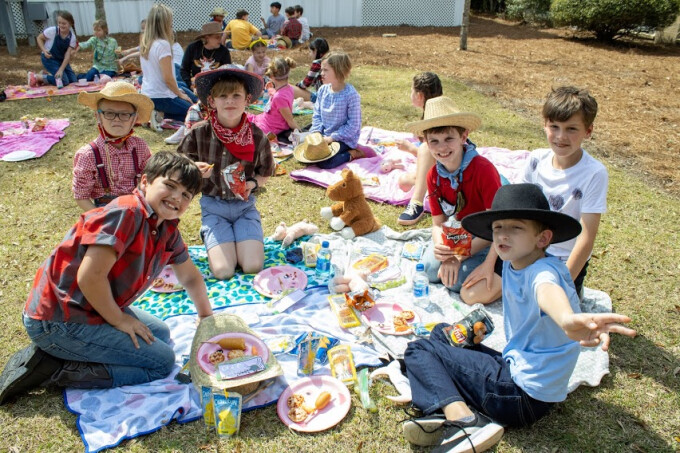 After completing the novel Charlotte’s Web, third-grade teachers thought it would be fun to tie up the unit with a class activity. As they began brainstorming, one thing turned into another and before they knew it they had a full-fledged fair on their hands.

Students were encouraged to dress up as characters from the book, and dress up they did! Every character from Fern to Templeton the rat was represented.

The students' parents, as always, rose to the occasion and not only brought in fair foods such as Corn Dogs, cotton candy, ice cream, and popcorn, they also created memorable tablescapes for each class.

The kids had a picnic lunch out on the lawn before playing fair games such as Don’t Steal the Bacon. “My favorite part was don't steal the bacon,” Maya Calderon said, “because it was a really good game.”

Haven Holmquest, from Mrs. Andrews class said, “My favorite part about the fair was the food because it was yummy.”

Kassy Cameron from Mrs. Watson’s room agreed, “I enjoyed the picnic the most because I liked the different food like the cotton candy and corn dogs and being with my friends!"

From all the smiles on both the kids and adults faces, we hope we see this fair become an annual PCA tradition!