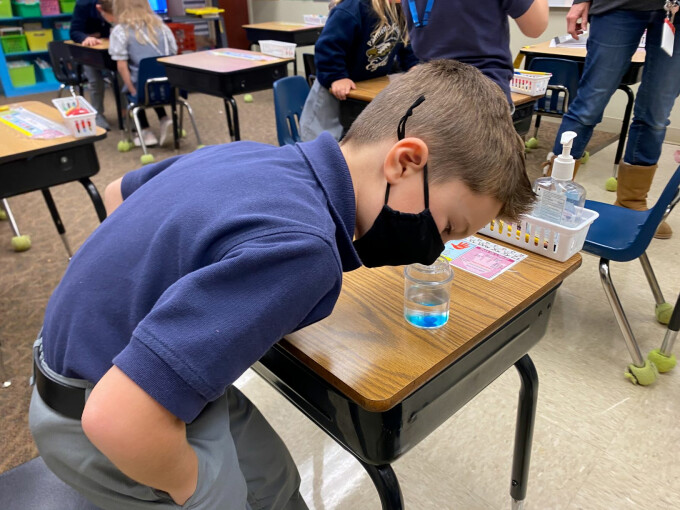 The first-grade classrooms are full of fun activities and surprises, and Mrs. Cumbee’s class is no different. Students have been studying the scientific inquiry process, where they make an observation, ask questions, form a hypothesis, make a prediction, test the prediction, and then using their findings, adjust their original predictions. Last week they put their new skills into action as Mrs. Cumbee introduced the M&M project.

Students paired up and dropped their M&M’s in small plastic containers filled with water. As they watched the candy sink to the bottom, Mrs. Cumbee told them to observe what the M&M would do. After several minutes they noticed the water starting to change color. “Now watch,” Mrs. Cumbee directed. “Watch the M, it’s going to float to the top.” And sure enough, after several minutes the class was abuzz with “Wow”s!” and “Oh’s!” as pair by pair they saw the edible sheet of glue that makes up the M of the candy, float in thin sheets to the top of the water’s surface.

It is safe to say that students were certainly surprised and may have a different view of what makes up an M&M!