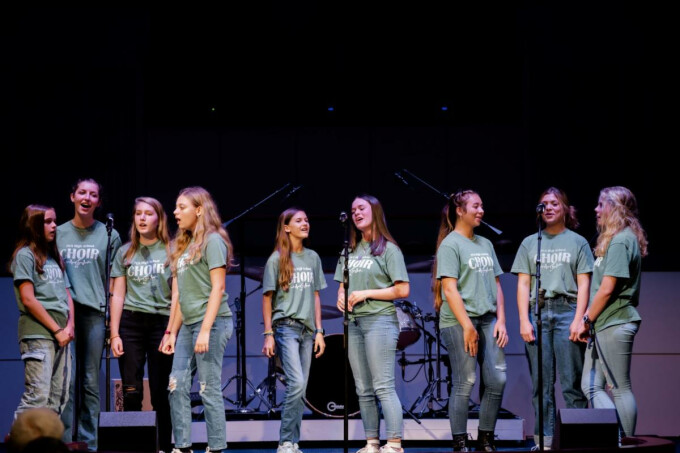 The PCA High School Choir and Band were all smiles at the 2021 Coffeehouse on Thursday, October 28. For the first time since the pandemic, students were back on the stage singing, dancing and playing their instruments to a live audience with the theme of “Songs That Make Us Happy!”

Choir Director, Kathy Thames explains, “Covid has affected the performing arts more than people realized. For a while, we were unable to have large gatherings where our choir and band students performed which created a huge void for the many students and people who love and depend on music. When we were told the Coffeehouse could go on, we decided to focus on songs that personally bring out the happy in all of us.”

The audience enjoyed students’ personal selections, such as Charlee Olson’s “Upside Down”, AnnaJaye Walter’s stirring rendition of “Landslide”, Bella Byham’s sweet performance of “The Rainbow Connection” and junior, Gabe Clark’s strong cover of Toby Mac’s “City on Our Knees”. The crowd was also treated to several moments where they joined in and sang along as with Riley Milligan’s “American Pie” and Will Wheeler’s fan favorite, “Sweet Caroline.” Hearing everyone sing along was “SO GOOD! SO GOOD!” Freshman and new choir member, Ian Marlow, amazed the audience as he played the piano and sang Billy Joel’s hit, “Piano Man”. Zella Horton’s moving rendition of Adele’s “Make You Feel My Love” was another crowd favorite of the evening, proving that PCA has some of the most talented students in the area. The Choir also performed several group numbers including, “I Want You Back/ABC” by the Jackson 5, “Dancing Queen” and the “Wellerman Sea Shanty” performed by the PCA Men’s Ensemble.

Our PCA High School Band, directed by Mike Doll, contributed to the happy tone of the evening by playing Pharell’s “Happy” and finished off the evening with a creative and fun bucket drumming number set to “Happy Dance” by MercyMe. Adding to the fun, the band sported some happy face t-shirts designed by PCA freshman Lydia Reneau.

Thank you PCA Choir and Band for giving us all a happy night of music!