The boys and girls track teams both won their second consecutive SCISA 1A/2A State Championships this past Saturday at Porter Gaud. The girls won by a convincing 40 points over the favorite Thomas Sumter while the boys fought their way to a 4 point victory over a very strong team from Bethesda Day.

The girls were led by Junior Lauren Pernell, who won the High Points award for the third straight year as the MVP for the state meet. Lauren won two events (100 hurdles, 400 hurdles) and finished second in two others (Long Jump, Triple Jump), scoring 36 out of a maximum 40 in individual events. Catherine Cave earned a first place in High Jump, a 2nd place finish in 400 hurdles, and two 3rd place finishes in Long Jump and 400 m to add 30 points to the PCA total. In possibly the largest upset of the day, the PCA girls 4x800 team, made up of middle school girls Anna Terry, Allison Kammer, Ella Banks, and Mae Cave, knocked 34 seconds off the school record to win the event, defeating Thomas Sumter by 3 seconds. Both Mae Cave and Allison Kammer also set new school records in the 1600 m and 3200 m respectively. In keeping with the contributions from the other middle school girls, 7th grader Lilly Corley won the Pole Vault to give the girls a great start to the day.

In the boys competition, the day started well with Hamilton Blair finishing 2nd in the 3200 and Hans Payne taking 5th in the same race. As the day unfolded, PCA continued to get great effort from every athlete in every event. Grayson Silvester took home the Boys' High Points Award. Grayson scored 26.5 points while winning the 400 m (new school record), coming in 2nd in the 100 m, finishing 3rd in the Triple Jump, and then anchoring the State Champion 4x400 team (new school record) in the most exciting finish of the day. In the total team effort, Brad Chaney, Michael Pernell, and Dalton Welch ran very strong legs of the race to keep the Eagles close for the exciting finale. As Grayson reached the 100 m to go mark, he was about 20 meters behind the Bethedsa runner. Yet, with a huge burst of speed, he passed the leader with about 10 meters to go. The Blazers were favored by 10 seconds coming into the meet. Other individual event state winners for the boys were Hamilton Blair (1600 m) and Dalton Welch (110 hurdles and 400 hurdles). With every point being necessary to win, the Eagles were also bolstered by strong performances by middle schoolers Hans Payne and Thomas Patrick along with 9th grader Gage Kennington in the 4x800. Track newcomer Robert Gregg was a key part of the 4x100 team and tied a personal record in the high jump.

Posted by Dale Hoover with
April 29, 2018
in Trips, Upper School 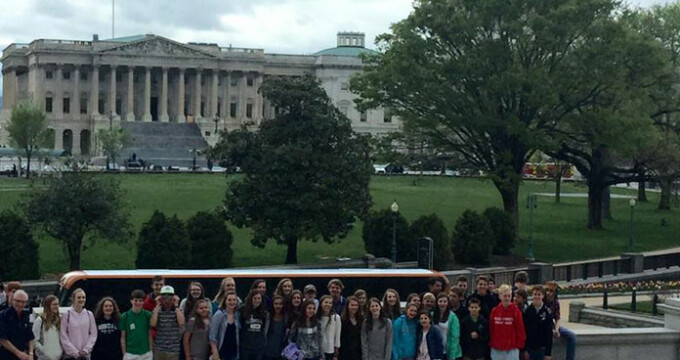 PCA 8th grade returned from a safe and educational trip to our nation's capital.

With Mr. Bill Schenkel and his vast arsenal of knowledge at the helm, we visited the Holocaust Museum, had a variety of Smithsonian stops, were amazed at the ceremony of the changing of the guard at Arlington Cemetery and cheered on the jumbotron at an Orioles game. We were lucky to be able to witness the process of creating national policy at the Senate and see the head of the Democratic Party speak. We all decided that the Museum of the Bible is a must-do if you ever find yourself in DC!

Memorials galore created memories galore for this great bunch of almost-high schoolers. Thank you to all of our chaperones and families who helped plan the trip.

Posted by Margaret O'Hanley with