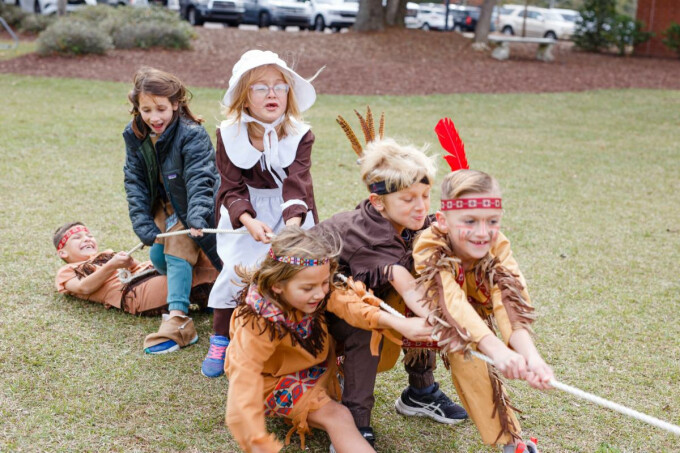 Each year the second grade classes come together to recreate the first Thanksgiving which was originally held in the autumn of 1621 by the Pilgrims and the Wampanoag. With help from the amazing Cafeteria Staff and a plethora of volunteers, a traditional Thanksgiving meal with all the trimmings was prepared. Room parents decorated tables on the Student Life Center porch where students got to feast in style on turkey, stuffing, mashed potatoes, green beans and of course, pie!

After filling their tummies, students headed to the beautiful green space in front of the school to participate in historic games that the children of that time period would have played (with a modern twist)! Games included tug of war, the corn husk toss, and toss a ring around a pumpkin!

“I loved EVERYTHING,” said Esther Ray, while all of Mrs. Atkinson’s class agreed that Tug-of-War was their favorite game.

It was a fun and educational experience enjoyed by staff, students, and parents!

The Merriest Of Afternoons At Our Annual Merry Mart! 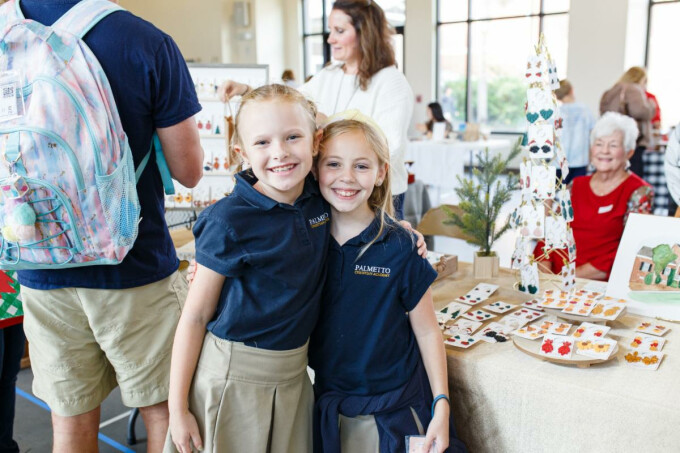 This year's Merry Mart was an incredible success! Shoppers and vendors enjoyed a joyful afternoon browsing through the merriest mart in town! More than 50 vendors, including some of our very own alumni and current Eagles, joyfully presented a vast array of incredible products and gifts! A festive crowd of students, parents, alumni families, and local vendors enjoyed fellowship, shopping, and a fun cake walk on the campus of Palmetto Christian Academy. It was a huge success and a wonderful beginning to the holiday season. Thank you to our talented vendors and to our many shoppers who joined us this year! A special thanks to Brantli McMillan, Margaret O'Hanley, PTF, and their team of extraordinary volunteers for a fabulous 6th Annual Merry Mart!