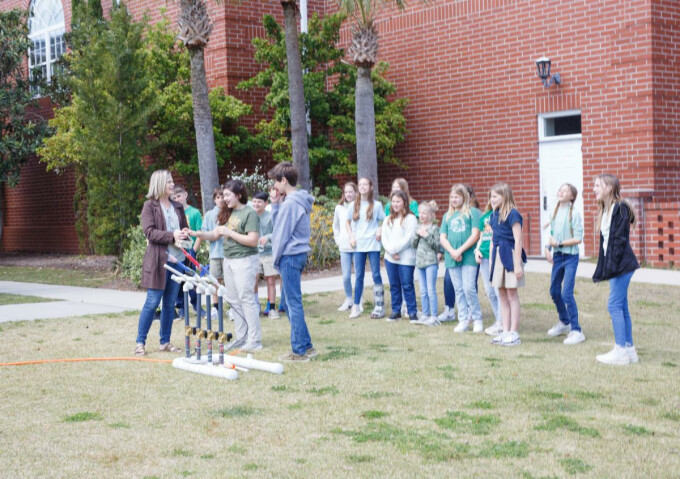 Last week the sixth and seventh grade students concluded their units on the universe and DNA and in a fun way!

Sixth graders concluded a unit on the universe. They studied the planets, stars, space history and space travel/rocketry. On day one, the students' task was to make a rocket out of construction paper, card stock or printer paper which could then be launched via air pressure. The rockets were launched at the beginning of class on day two and then the students returned to class to make modifications in the hope to improve rocket performance. On day three, they wrapped up their modifications and relaunched the rockets. The students then evaluated the effectiveness of their modifications in terms of rocket performance. They did awesome! Five rockets landed on the roof of the ECBC sanctuary!

The seventh grade classes were also participating in hands-on learning. Their class had been learning about the structure and function of DNA along with genetics. They were able to see this through a lab that extracted strawberry (plant) DNA. They used hands-on procedures to break through the barriers of a plant cell (cell wall) and isolate and observe actual DNA molecules from strawberry fruit. Although the double helix shape of DNA is not observed, the millions of strands together are observed! It’s pretty cool!

Posted by Kimberly Moser with
April 4, 2022
in Lower School

Tapping Into Engineering Skills With The Fluor Challenge! 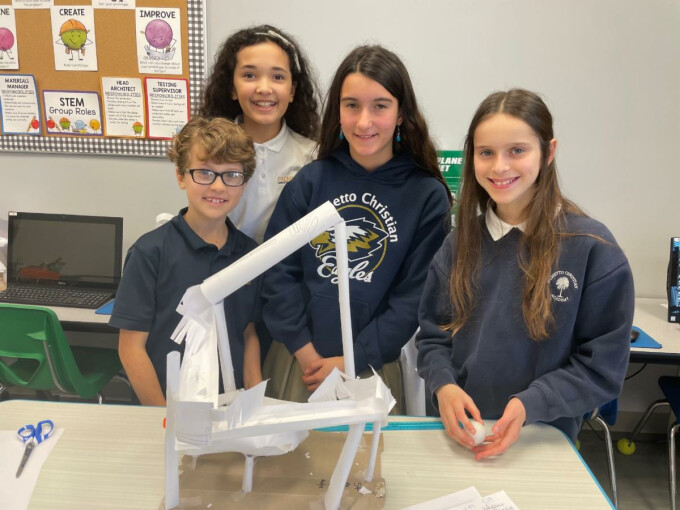 A class of engineers! Over the past weeks, fourth and fifth grade students competed in the worldwide 2022 Fluor Engineering Challenge. Divided into teams of four, students created paper ball runs hoping for the slowest time possible. Students discussed friction in order to slow the balls down, practiced their measuring skills, and worked on teamwork throughout this project. You could easily feel the excitement in the room! Out of the 28 teams that competed, we submitted 19 projects for the official drawing. This was such a fun challenge in the STEM lab!

Posted by Ellen Peek with