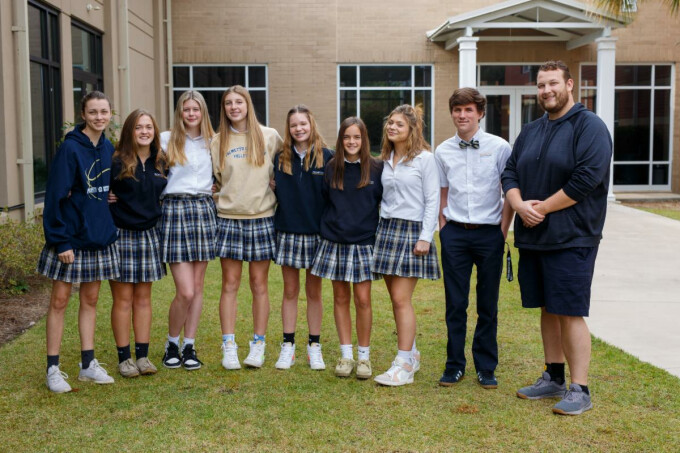 The phrase “we’re all in this together,” takes on a whole new meaning when talking about this year's Audio-Visual (or AV) Club. The faces in the booth may look familiar, and that is because by day they are the AV Club but by afternoon many of them also double as the Varsity Girls Basketball team.

How did this come to be? It all started with a simple ask from AV Original Member and Varsity Girls teammate Abby Creech.

“It was a Troy Bolton moment,” said team member AnnaJaye Walters, referring to the beloved teen Disney movie, High School Musical, when a group of friends who have never acted before, all join the school play because their best friend and “leader” Troy Bolton asks them to.

“Abby asked us to join,” said SarahAnne Horne, “and we don’t get enough time to bond on the court.” Walters agreed, adding, “we all wanted to bond as a team and to serve PCA and this club allowed us to do that.”

But the AV team is much more than just a basketball team bonding experience. It's a group of students who are stepping up to participate in an expanded use of technology - learning how to properly operate equipment for lights and sound for various school events. The AV team consists of Colby Dumont (12), AnnaJaye Walters (12), Abby Creech (11), SarahAnne Horne (11), Reed Jones (9), Cokey Suddeth (9), Emily Romfo (9), and Scotty Wrenn (9).

The newest members run elements such as slides and intro music while “their fearless leader” Abby mans the soundboard. Original founding member, Colby Dumont, who has been trained on the equipment since seventh grade handles the lighting.

When asked how AV club has benefited him, Colby explained, “I was able to learn how the tech stuff works and during school plays I could control and operate the special effects.”

The next time you are enjoying an event in the Worship Center at PCA, make sure you look up to the booth and give a wave to the hard working students and crew who help bring the sight and sound to the event. 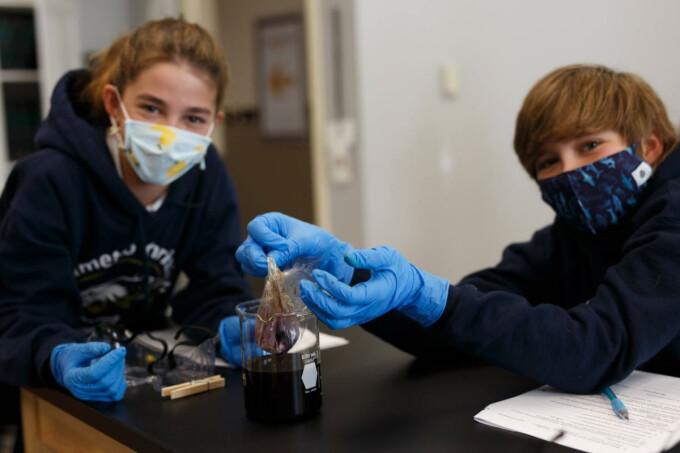 Kim Moser’s 7th grade science students recently learned about diffusion and how it relates to a semipermeable cell membrane through an exciting hands-on lab experiment. The question to be answered: How can diffusion be observed?

Students wasted no time in starting their investigation, beginning with constructing their lab. Partners worked together to fill a glass beaker with a water/iodine solution and prepared a baggie with a cornstarch and water mixture.

Back at their seats, they clipped the cornstarch mix bag to the side of the beaker, submerged it in the iodine solution, and sat back, pencils and lab packets in hand to wait for any change to occur in their materials.

After some time the students began to see their white cornstarch/water solution turn purple!

The students were able to conclude that the iodine diffused through the baggie. “It would be passive transport if it were a cell,” noted Parker Pinson.

What did the students think overall? “It’s interesting to see it change colors,” said Maggie Anderson. They also concluded that it is not a good idea to store iodine in a plastic bag!

Mrs. Moser sure knows how to turn learning about diffusion and transport through a cell membrane into a fun color-changing scientific experiment.